How to make your own song
with Matthias Kadar

Making your own song is not as complicated as it seems! In this Interactive music composition course, Matthias Kadar takes you on a journey through the land of composition, and the rhythm and beauty of words and poems. You will explore creative ways on how to compose your song, how to find and combine melodies and how to play with words. Matthias Kadar is a fun and versatile teacher!

“I like Matthias as a teacher, I find his videos enjoyable, and he is very honest and detailed in his feedback to my trials, he points out to me where I go forward too quickly.” 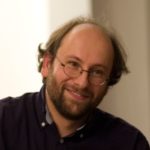 “As a composer and singer, I keep looking for lyricism, atmosphere and timbre. Texts and poems play a special role: they inspire me with the sound and melody of the language in which they are written. Both my contemporary compositions for voice and my songs, the music, are as if they were dictated by the language: the prosody, the meaning and the ‘weight’ of words and phrases, but also by the specific musical characteristics of a language, it’s sound, melody, rhythm and accentuation. In the songs I write and sing, the music will often be at the service of the text. It always concerns me to keep the text intelligible and preserve the music and the emotional content of the text.”

Matthias Kadar, composer and singer, is noted for his idiosyncratic musical language and distinct writing style. Kadar studied composition and piano with Christian Lauba in Bordeaux and later with Theo Loevendie at the Amsterdam Conservatory. Since his first composition in 1996, he composed about 250 works for solo voice or instrument, ensemble, orchestra and theatre that have been performed worldwide. His collaborations as a composer/ singer have taken him or his compositions to the most prestigious concert halls or festivals in Europe, USA, Australia and Asia. Together with Iván Fischer, he worked for more than a decade on different musical projects.

Buy Now
We use cookies on our website to give you the most relevant experience by remembering your preferences and repeat visits. By clicking “Accept”, you consent to the use of ALL the cookies.
Cookie settingsACCEPT
Manage consent