These lessons are studied explicitly for intermediate and advanced players to experience how to bring the magic of pop songs into classical guitar technique. Therefore you will be able to play according to all the academical and traditional ways in a different and modern dimension.

Each song/lesson contains the performance by the teacher, 5 to 7 tutorials plus the score and tabs. 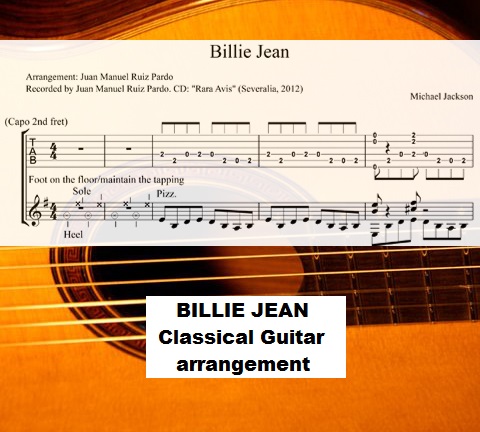 Graffic tabs all along – Downloadable PDF

Learn the famous Pink Floyd song “Wish you were here”

PDF included – Graphics tabs all along

How to play the famous Eric Clapton song “Tears in Heaven”

PDF included – Graphic tabs all along

Juan Manuel Ruiz is a performer, arranger and teacher from Murcia, Spain. He was awarded to follow postgraduate studies with Robert Brightmore at the Guildhall School of Music & Drama (London), where he developed a monographic on the guitar Works of Mario Castelnuovo-Tedesco. Juan won 1st Prize at the XIV Concurso Internacional “Martín Códax” (Cuenca) and was awarded at the 2nd Aveiro Internacional Guitar Festival (Portugal).

Arrangements/compositions – A very active arranger, his transcription for four guitars of Prokofiev´s “Classical” Symphony deserved a public greeting from Leo Brouwer, for whom he performed it at the X “Semana de la Guitarra” from Cartagena. He premiered his “Three Gigues” for guitar and orchestra both as composer and soloist at the 7th Lliria Chamber Music Festival (Valencia).

Teaching – He has been guitar teacher at the “Victoria de Los Ángeles” Conservatory (Madrid); at present, he teaches at the Cartagena Professional Conservatory and offers masterclasses on arranging, performance and improvisation. Juan has recorded a series of instructional videos for Cicerone Music & Art on his arrangements of pop & rock repertoire and has released 2 CDs: “Chopin para Guitarra” and “Rara Avis”,

“It looks really good, very thorough and comprehensive. Not rushed, a patient, calm teacher. I am perhaps a little below the standard that is required for this level, but for me, it works and I can learn how to play this piece with time. Very happy so far.”